Certainty of being insanely uncertain!

Intrigued by the name? Well that’s what caught my attention too when I first heard of it. Then I saw the pictures. And then I heard about the place. Now all this happened when we were traveling in a local train standing near the door(which means the aromatic washrooms weren’t too far), so all my attention was definitely focused on my friend narrating his experience. What started as a way to keep myself distracted actually ended up in me writing this name “Meesapulimala” in my Places to visit list. And when I set out with a few friends to this place exactly a month after, I knew it wasn’t a wrong decision.

2640 meters above sea level at its best, Meesapulimala is the second highest peak in the Western Ghats, they say. It is located at the Kerala and Tamil Nadu border. And you can see the best of both states from on top of this Hill.
The night before the trek we camped in the middle of a tea estate in a small town called Suryanelli in Idukki district, Kerala. The owner of the campsite arranged a jeep for us to be driven until the starting point of the trek. So the jeep arrived at 4:00 AM to pick us sleepy heads up. We did not need any warm up before we began the trek, for the drive up the hill did the job. Not only did it wake us up from our sleep, it displaced all our organs! But O’course I wouldn’t be writing about it if it wasn’t worth remembering 🙂

The jeep helped us cross the border and took us into Tamil Nadu, for that’s where our trek was going to begin. Before we started our trek, the jeep driver gave us a little pep talk and told us not to cross the borders which would mean venturing into the Kerala side of the region. That would mean we’d trespassing into the forest area. And being the obliging citizens that we were (not to forget the fear of getting lost in the forest, especially the one where we couldn’t speak the languages of both sides of the border), we agreed.

It got very bright and sunny pretty early in the day and it definitely didn’t cheer us up to begin with. Although the terrain is not very tough to scale, it is a long route. And on our way up we climbed through the Kolukkumalai tea estates, known to be the World’s Highest Tea Estates! If I’d known this while doing the ascend, I would have for sure wasted time clicking more pictures.

I did mention how sunny and hot it was climbing up, but what I didn’t mention is how it didn’t matter! The path going up was so beautiful and worth every drop of sweat. The air that you breathe in is so fresh that you can only wish to bottle some and take it home with you. After trekking for an hour or so, we reached a point, where we were faced with two options. One where we had to climb a small peak and didn’t know what was on the other side and the other was to clamber up what looked like a 90 degree ascend to the Pearly gates. We did a quick round of brainstorming and concluded that if Meesapulimala is the second highest peak, then that steep path was what would lead us to it. We took a deep breath, gathered all our will and vigor and started the climb.

It took us less than 15 minutes to start doubting our decision making skills. We turned around and plonked ourselves on the ground and what we saw immediately dismissed all second thoughts. The view from that place was just mesmerizing! The sun seemed far away beyond the peak that we started from. The clouds floating in front of our eyes seemed almost dream like. The breeze was thoroughly comforting too. And we hadn’t even reached the peak yet!

We had a quick power nap of about 20 minutes, and we were back on our feet more enthusiastic than when we began. In the next half an hour, we reached the peak. For the first 5 minutes we were just clicking pictures and patting ourselves on our shoulders for finally making it there and enjoying the fact that we had no one else for company. But then it all began! It first started on one side and then slowly started engulfing us from all corners. And before we knew it, we were inside the clouds. Yes, you read it right. It was like being in a slow motion movie. As we were watching, the blankets of clouds just consumed us and we were in its bosom. That’s the last I heard anyone talk, we lied down on our backs in a state of trance. Time was something that existed in another world, for we were transfixed in that moment.

We woke up an hour later when we heard some noises of other sapiens. Another group of trekkers arrived through another route and they had a guard with them who yelled at us for wandering off into the forest and crossing the border. We’d unknowingly done exactly what our driver told us not to do! After explaining to the guard that since there were no boards or fence to warn us that we were about to enter unwelcome territories it wasn’t our fault, he let us go.

We started going down, praying that our jeep driver hadn’t abandoned us and hoping we make it till the jeep as the visibility was about 20 ft and the descent was steep. Just when we were discussing how much of nature we’d soaked in that day, the showers decided to tease us. Like the saying goes ” It poured cats and dogs”. And amidst tea plantations, unless you are a midget not taller than a couple of feet, you can’t hope for shelter. For the lack of shelter and fear of our jeep driver calling it quits, we decided to embrace the rains and just keep moving. Just when we were a kilometer or two away from our jeep, the ground under my feet gave away and i fell twisting my knee. This is what i feel gained us some sympathy from our driver who otherwise was enraged. We had not only not followed his instructions but we were 4 hours late!

There was a small canteen there that served Maggi noodles. And nothing was more welcoming to us 5 dripping wet crusaders. Despite the long wait and the loss of business we caused Mr. Ram ( Our chauffeur for the day), agreed to take us to the HML tea factory before dropping us off at a home-stay which he booked for us at short notice. We sat in the jeep thinking that nothing else we see for the rest of the day can be as enthralling. Yet again we were wrong. We drove past a small water fall, replenished by the showers that just left us spell-bound.

To sum it all up the Meesapulimala trek was just HYPNOTIC! 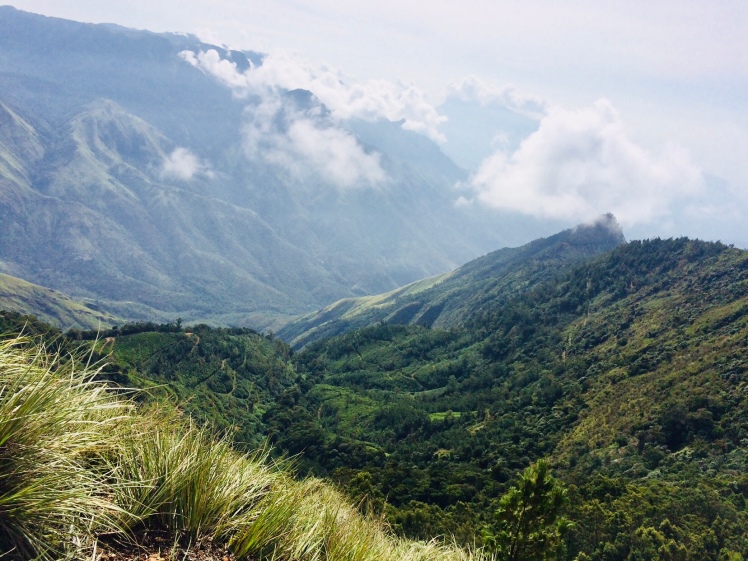